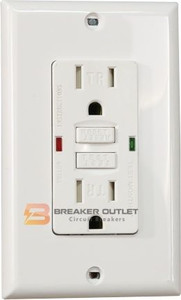 The ground-fault circuit interrupter (GFCI) has enjoyed tremendous notoriety as a protective electrical device. Since its introduction in the 1960s, the amount of non-utility electrocutions has sharpley dropped.

The GFCI resembles overcurrent devices because they interrupt the circuit rather than allowing it to continue operation when a dangerous situation develops. The GFCI continually monitors the circuit, comparing the amount of current (number of electrons flowing in a conductor past a given point per unit of time) in the hot wire going into the load to the amount of current in the neutral wire coming out of the load. These two amounts, in accordance with Kirchhoff’s Current Law, should be the same. If they are not, there is a ground fault in the circuit. If a person, typically grounded, becomes a part of this fault path, the result will be electric shock — which sometimes can be lethal. The GFCI senses this current imbalance and quickly interrupts the circuit, greatly limiting the hazard.

The National Electrical Code (NEC) has continually expanded the number of locations where GFCIs are required — particularly in residential kitchens. The rules for these locations are complex, and there is the possibility for installation errors. Although it is conceivable that a GFCI can be miss-wired, most violations involve failure to install GFCI protection in the first place. Since it is difficult to photograph GFCIs that have not been installed where mandated, this month’s gallery of GFCI images consists of compliant installations rather than those that are in violation of the NEC. Let’s take a look at how to do it right.

We use cookies on our website to give you the most relevant experience by remembering your preferences and repeat visits. By clicking “Accept All”, you consent to the use of ALL the cookies. However, you may visit "Cookie Settings" to provide a controlled consent.
Cookie SettingsAccept All
Manage consent

This website uses cookies to improve your experience while you navigate through the website. Out of these, the cookies that are categorized as necessary are stored on your browser as they are essential for the working of basic functionalities of the website. We also use third-party cookies that help us analyze and understand how you use this website. These cookies will be stored in your browser only with your consent. You also have the option to opt-out of these cookies. But opting out of some of these cookies may affect your browsing experience.
Necessary Always Enabled
Necessary cookies are absolutely essential for the website to function properly. These cookies ensure basic functionalities and security features of the website, anonymously.
Functional
Functional cookies help to perform certain functionalities like sharing the content of the website on social media platforms, collect feedbacks, and other third-party features.
Performance
Performance cookies are used to understand and analyze the key performance indexes of the website which helps in delivering a better user experience for the visitors.
Analytics
Analytical cookies are used to understand how visitors interact with the website. These cookies help provide information on metrics the number of visitors, bounce rate, traffic source, etc.
Advertisement
Advertisement cookies are used to provide visitors with relevant ads and marketing campaigns. These cookies track visitors across websites and collect information to provide customized ads.
Others
Other uncategorized cookies are those that are being analyzed and have not been classified into a category as yet.
SAVE & ACCEPT
Scroll to Top